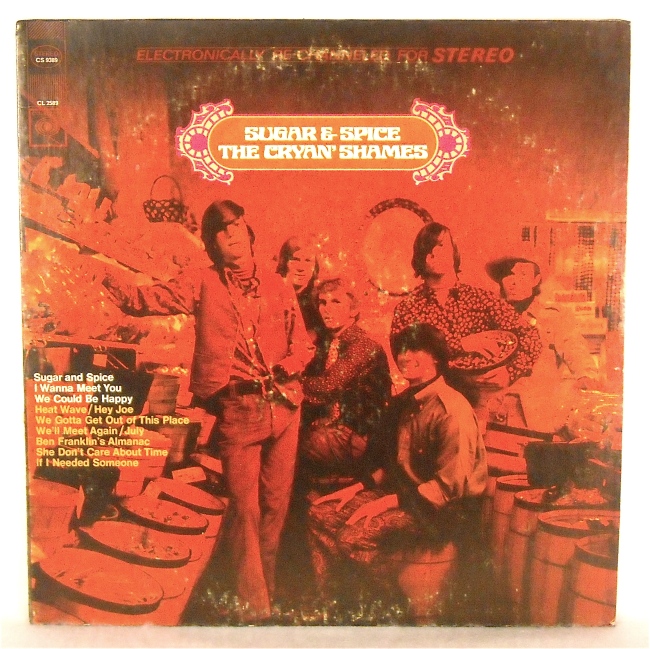 For my next album review, I’ve decided to go with The Cryan’ Shames’ debut album Sugar & Spice. Sugar & Spice was released on Columbia Records in 1966. The Cryan’ Shames would go on to record two more albums before breaking up in 1969. Like most garage rock bands of the time, a fair amount of their songs are covers. Two of the most well-known songs on this album, “Hey Joe (Where You Gonna Go)” and “We Gotta Get Out of This Place,” are covers of 60s standards. “Hey Joe” is particularly strong. It is not as fast, loud, and raw as the version previously reviewed by The Shadows of Knight; however, that’s not to say it’s bad. This version is a little heavier on the bass, giving it a slightly darker tone. Unfortunately, “We Gotta Get Out of This Place” is not as strong of a cover. Tom Doody just does not have the powerful vocals like Eric Burdon from The Animals. The song is decent, but I’d pick the original any day of the week. Besides these two popular covers, The Cryan Shames also had a couple lesser known covers that ended up being minor radio hits for them: “Sugar and Spice” and “If I Needed Someone.” Both songs are solid garage rock songs. “Sugar and Spice” is quick and simple but catchy, similar to many radio-friendly surf rock/garage rock songs. “If I Needed Someone” is a Beatles cover that has a little psychedelic element throughout. Although those songs would bring The Cryan’ Shames some notoriety, they really shine on songs like “Heat Wave” and “She Don’t Care About Time.” Both songs are fun in their own way. “Heat Wave” has a fast, repetitive beat that seems like it should have it’s own dance to it. “She Don’t Care About Time” is equally as compelling despite being vastly different. It sounds pretty similar to the folky rendition first performed by The Byrds. Not all of the songs on the album are solid tunes though. “We Could Be Happy,” “We’ll Meet Again,” “July,” and “I Wanna Meet You” are all subpar. All four are softer and have more of a pop feel. Also, they tend feature Tom Doody’s vocals more, and I believe he’s the weakest link in this band. Perhaps these songs just don’t fit the character of the band and thus weren’t their best showings. Never fear… I’ve saved the best for last. “Ben Franklin’s Almanac” is by far my favorite song on the album. It is one of the few original songs on the album, written by guitarist Jim Fairs (who was only 18 at the time of recording this album). It has a fast psychedelic/garage rock beat with a stunning guitar solo in the middle. Hearing this short but sweet solo on vinyl might be reason enough to pick this up if you find it for a good price. Overall, this album is all over the chart. Some garage rockin’ foot stompin’ jams. Some poor pop-filled gags. And one “Almanac” to rule them all.  B-