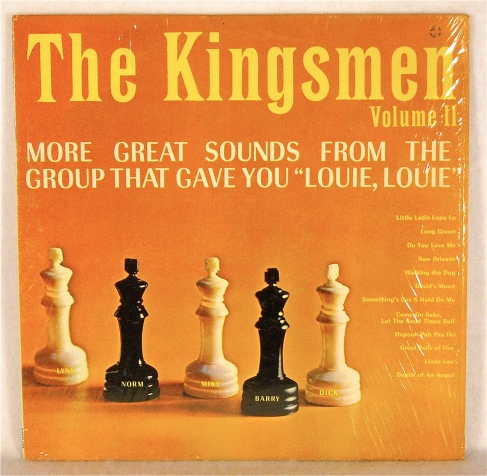 The Kingsmen are back for their second appearance on this blog with The Kingsmen Volume II. This album, released in 1964 on Wand Records, is the follow-up to their successful The Kingsmen in Person. Like their debut, Volume II is also a live album packed with solid garage rock tunes. For starters, The Kingsmen perform quite a handful of garage rock standards, such as “Walking the Dog,” “Ooh Poo Pah Doo,” and “Linda Lou.” Garage rock purists will love these renditions because in many ways The Kingsmen were the leaders of the pack. Some of these songs may not have gained such notoriety if The Kingsmen hadn’t covered them. The Kingsmen also attempt to broaden their appeal a little bit by performing garage rock covers of popular rock ‘n’ roll songs like “Do You Love Me,” “Come on Baby, Let the Good Times Roll,” and “Great Balls of Fire.” All three songs are top-notch performances, adding to the core of The Kingsmen Volume II. The Kingsmen prove that they can still bring the fast, free beats culminating in great hip-shaking vibes. For those who may grow tired of the ever-present sound of garage rock, The Kingsmen throw “David’s Mood” right in the middle of the album. This instrumental eases any potential feelings of being overwhelmed with that pure garage sound. While it’s not out-of-this-world amazing, it is interesting to see The Kingsmen flex their creative muscle a little bit. The album is also supported by minor hits like “New Orleans” and “Long Green.” Both songs remind you why simplicity is sometimes better. They are beautifully repetitious and full of energy. With these two songs you can clearly tell that The Kingsmen bring their all when they perform live. Perhaps my favorite song of the album is actually the very first song, “Little Latin Lupe Lu.” This song would renew The Kingsmen’s time on the Billboard chart and garner them more fame. Its Latin-inspired beat is fun and makes you want to do the mashed potato. Even the songs that I didn’t care too much for, like “Something’s Got a Hold on Me” and “Death of an Angel,” are decent enough tunes. While they don’t resonate with me very much, I can’t say that they are bad songs. All in all, for the garage rock purist, there are very few bands that can produce like The Kingsmen. Those who may favor blues or psychedelic rock might not find what they’re looking for, but those who dig that mid-60s beat will have to have their hands on this album. My only gripe is that I’m not convinced that the album is actually a live album. The audience applause seems extremely cohesive, almost robotic. I have a strong suspicion that it’s actually an applause track used to make listeners think it was recorded live. Also, no where on the album does it mention a day, time, or place that this supposed concert was supposed to have happened. Perhaps I’m being nitpicky. Bottom line: if you like garage rock, buy this album. If you don’t, there’s plenty of other good album reviews on this blog.  A-