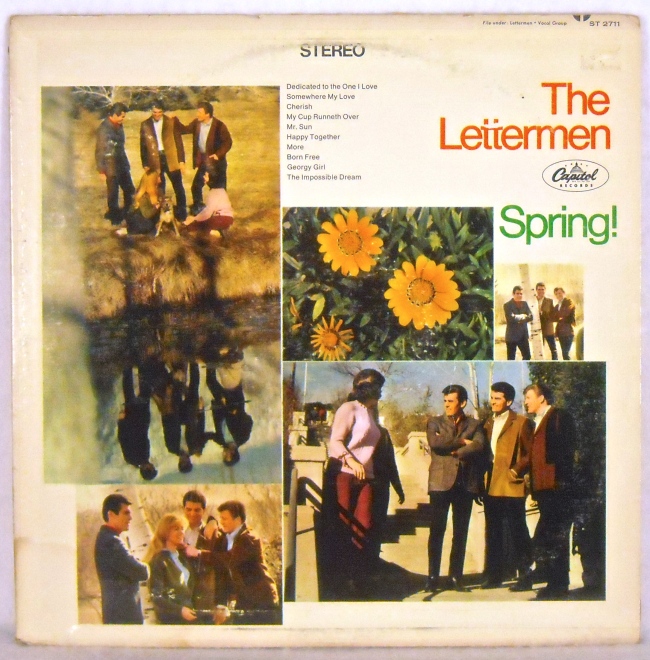 Although spring usually indicates growth, freshness and rebirth, Spring! is anything but fresh. Released in 1967 on Capitol Records, this album is unfortunately, little more than more of the same 60s soft pop from The Lettermen. The Lettermen carved a name for themselves in the early 60s with their handsome looks and smooth harmonization; however, by the late 60s their popularity was beginning to wane and they were in need of a fresh approach. Unfortunately, instead of putting their talents together and coming up with some original material, the boys borrowed hits from the charts here and there, hoping to record something that could crack into the top 100. Despite their best intentions none of the songs took off–most were nothing more than mediocre covers of pop singles. For example, their cover of “Happy Together” is a solid tune, but it’s almost indistinguishable from the original version released by The Turtles just a few months earlier. The “5” Royales’s hit “Dedicated to the One I Love” is also featured on this album despite the fact that a cover version by The Mamas and the Papas had already charted a few months before. The one redeeming song on the album is the psychedelic pop song “Mr. Sun.” It draws heavy influences from The Beatles’s crossover into the psychedelic genre, although it still remains unique and fun. Despite being a welcome relief from the monotony of mediocre covers, “Mr. Sun” is not enough to prop up the entire album. Perhaps if The Lettermen had focused more on quality rather than quantity (this was their 14th album over a six-year period), they could have produced stronger albums and stayed together longer. (One of the three boys, Bob Engemann, would sell his interest in the group shortly after this album’s release, although The Lettermen name still lives on today after many, many lineup changes.) The only reason to pick up this album is for “Mr. Sun,” but if you can find it on a 45 somewhere, you’re better off going that route.  D