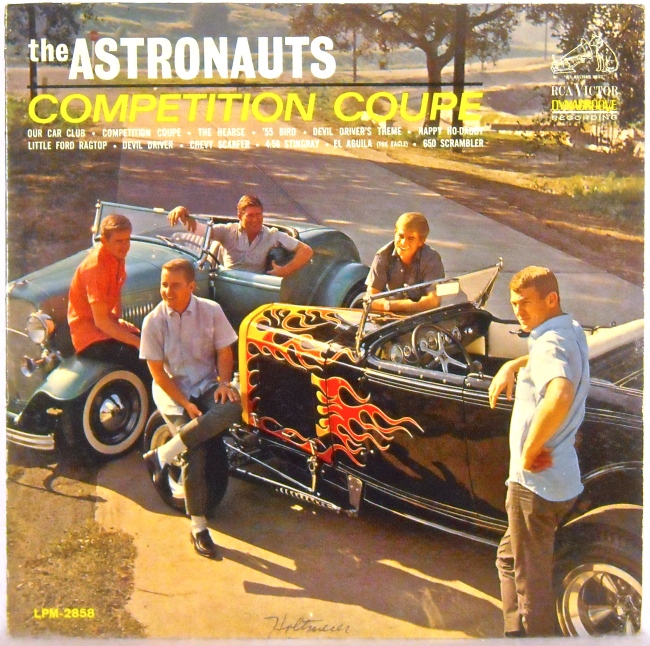 The Astronauts became a regional success in the early 60s as a Midwestern surf rock band. Despite their lack of surfing skills, the band fell into step with prominent West coast surf rock bands like The Beach Boys and Jan and Dean. By the mid-60s such bands began to branch out from songs about surfing to songs about cars and girls, which is now referred to as hot rod music. Never ones to miss a trend, these boys from Boulder, Colorado quickly followed suit, releasing Competition Coupe on RCA Victor in late 1963. While it’s easy to rag on The Astronauts for capitalizing on the trend of the moment, there’s something to be said for adaptability. If you want true American hot rod music, this album delivers. Songs like “Little Ford Ragtop,” “’55 Bird” and “4:56 Stingray” epitomize vocal surf/hot rod rock with easy, pleasant harmonies, driving electric guitars and a relatively fast tempo compared to other forms of rock ‘n’ roll at the time. While the dominance of the electric guitars harkens back to the sounds of Chuck Berry and other electric guitar pioneers, the increased tempo paves the way for future forms of rock including garage rock and protopunk. Although The Astronauts prove themselves masters of the typical surf rock sound, they also prove their dexterity with instrumental numbers like the saxophone-heavy “Chevy Scarfer” and the Latin-infused “El Aguila (The Eagle).” Overall, this album is one of the preeminent hot rod albums of the early to mid-60s. For anyone who is interested in surf rock, garage rock or protopunk, this album is well worth picking up as it represents elements of all three. The album’s depth is also very surprising as there’s not really a bad song either side.  A