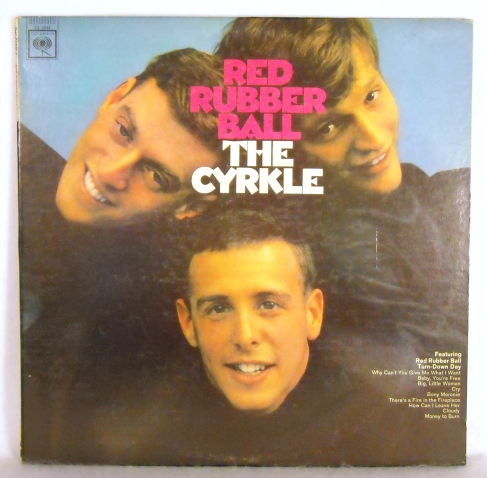 To be perfectly honest, I had never heard of The Cyrkle before I picked up this album. I was flipping through the 50s and 60s rock ‘n’ roll section of my local record store when I saw that this album had a cover of “Bony Moronie”on it. Released in 1966 on Columbia Records, Red Rubber Ball is the debut album of the short-lived American pop rock band, The Cyrkle. Knowing that “Bony Moronie” had been covered by many good garage rock bands, I was confident that this album couldn’t be too disappointing. I was wrong. Almost every song in the album is an extremely cliché mid-60s love song. The sound is generic, the lyrics are uninspired and recycled, and the harmony does nothing to leave a positive impression on the listener. Although I would hesitate to call any of the songs on the album bad, I would not call a single one of them good. The best word to describe the sound of this debut album is bland. Each song makes the listener think that they’ve already heard it one million times before; it is familiar and generic to the point of boring. The Cyrkle did have a minor hit from the album in “Red Rubber Ball,” but I cannot say that I’m moved by it anymore than the others. Even when I reached “Bony Moronie,” I was dismayed at The Cyrkle’s decision to fragment the lyrics and slow the tempo. They would have been better off if they had just straight copied any number of the garage rock renditions. The sole saving grace of the album comes from some of the mildly talented guitar playing. Tom Dawes has a few short but solid riffs throughout the album, most notably on “There’s a Fire in the Fireplace.” Perhaps the most disappointing fact about the band is that they toured with Simon and Garfunkel and The Beatles at different times in their career. Upon learning that they had toured with such great names, I had pretty high hopes for the album. In fact, John Lennon is said to have taken such an interest in the band that he even came up with the unique spelling of their name and pushed for their success within the record company. Overall, I would not recommend picking this album up if you’re looking for something fresh or interesting. Having said that, there always has been and there always will be a place in the music industry for generic poppy love songs. The reason is, some people do indeed like them. If you’re one of those people, this album is for you; if not, read some of my other reviews for more creative underground 60s music.  D+