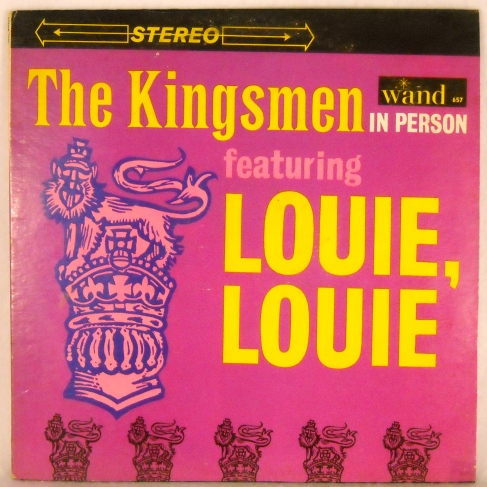 For my next album review, I’ve decided to go with something that everyone probably knows but doesn’t fully know. Most everyone would recognize the song, “Louie, Louie,” but only a small number of people could actually name the band who performed it, and even fewer could name another song by that band. Thus, this 1963 album by The Kingsmen seemed like a great choice for this blog. The Kingsmen in Person, the group’s first album, is a live album released by Wand Records. The Kingsmen would go on to record several more albums in the mid-60s until fading into obscurity in the late 60s. An interesting thing about this album: Jack Ely, the lead singer on “Louie, Louie” quit the band after the song was recorded (A studio version of the song was released as a single before this album) but before this live album was recorded. Thus, Lynn Easton would lip-synch this song in live performances until a lawsuit put an end to that practice. This infamous song opens up the album. Of course it’s amazing. It was and remains a garage rock standard. Very fews band were as pure garage rock as The Kingsmen. The next song, “The Waiting” is also a spectacular garage rock song. “Mojo Workout” follows with a predominately instrumental sound that flows well in the album. The fourth song of the album, “Fever” is a love song with bluesy influence and a heavy keyboard. It’s just as strong as the previous tracks. Although it may espouse a slightly greedy sentiment, “Money” is straight to the roots of that garage sound. “Bent Scepter” closes side one of the album as an instrumental jam that helps round out all the other tracks thus far. Side one of this album is just truly amazing. Side two of this album opens with “Long Tall Texan.” This song is extremely interesting because it’s much more of a rockabilly number than a garage rock song. Although The Kingsmen very rarely strayed from that pure garage rock sound, this song proves that there is an exception to every rule. And it’s a very good exception. The next song, “You Can’t Sit Down” is an instrumental that does exactly as its name implies: it makes you want to dance. The song that was covered by every band in the early 60s, including The Beatles and The Who, “Twist & Shout” follows. Their version is quite similar to the popular version recorded by The Beatles; nonetheless, it’s a fun song. A song titled “J. A. J.” follows as an instrumental. It, too, is a solid track. The next song, “Night Train” is also an instrumental. It’s a little faster and a little more fun. The album closes with “Mashed Potatoes,” yet another instrumental. (I guess the band wasn’t much on vocals after Jack Ely quit.) This one, too, has a strong garage rock, danceable sound that does much to equate The Kingsmen with the garage rock movement. Overall, this album is fantastic. If you’re at all interested in garage rock, this album is a must. This album could stand as a model for other garage rock albums. Go buy it now.  A